I have to admit it that I’ve always been a rock collector.  I was that kid that came home with pockets bulging full of an indistinguishable treasury of rocks.  The rocks weren’t inanimate objects to me, but they were an enormous hassle to my mother. She reminded me of the inconvenience often.  I can recall her scolding me, as she pulled the filth from my pockets on laundry day.  But her dismay never stopped me, and now that I’m a grown adult, I get to experience the joy of rediscovering the previously plucked rocks from my own pockets.  I believe that I earned my sentiment for rocks, when I was a young girl, maybe even just a toddler. It all started when my father showed me the geodes that he had collected as a teenager.  From that day forward, I had an obsession with inspecting, collecting, and even smashing open rocks. While I do love to collect them, I don’t normally manage to keep them. I have an aversion to hoarding, so when I’m done with them, I pass them back to nature, or onto an intrigued youngster.

It just so happens, that the latest intrigued youngster, is my own 3.5 year old daughter! The most recent find, was collected on the beautiful cocoa beaches on the central coast of Ecuador. The discovery of such a wonderful treasure, was an experience that both of us will remember for a long time, maybe even forever. We happened upon the rather large rock, quite by mistake.  We were walking hip to hip, our toes digging into the sand, searching for the perfect sea shells for an art project. Simultaneously, we spotted this amazing purple mollusk shell. It appeared to be completely intact, and its colors dazzled us beneath the salty water and sparking sun. We giggled, as we raced to see which of us could pick it up first. 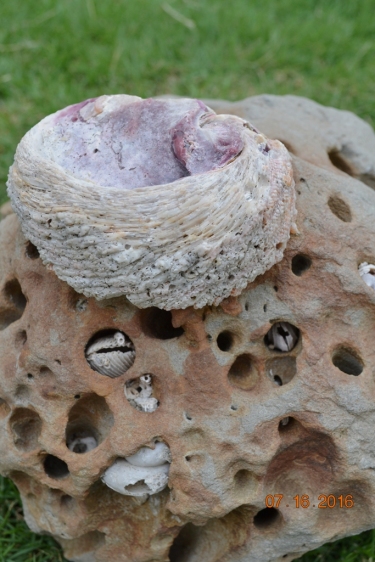 It didn’t move with the first nudge, and we gathered next to each other to give it a nice tug. When it still didn’t pull loose, we knelt in the sand and started to dig. This was the time that we realized the shell was stuck to a rock. We pushed the sand away from the edges, to allow us to wiggle and push on the rock. The rock still didn’t come loose, and my daughter became giddy with excitement, as she was sure that we must be unveiling a prehistoric fossil. We activated the super powers of our trusty sand shovels, and dug a little more. But, to no avail! We claimed defeat, and called for the wiles of Daddy. As my husband came to the rescue, he shook his head in bewilderment and grinned in amusement. He playfully cajoled us, as he freed the fabulous rock. We carried the buried treasure to a tide pool, to rinse away the sand. This rock was so much more marvelous than a purple mollusk shell! We couldn’t believe our eyes as we rinsed and rolled, inspected and discussed the possibilities. The wonderful and quite large specimen was full of holes, many of which were inhabited by clinky white shells, and hardened tubes that looked like hollow worms. Some of the holes were just small enough to pass a string through, others were the thickness of a pencil, and a few were big enough to fit an adult finger into. Most of them did not pass through the entire diameter of the rock, but a few did. We spent a good long time discovering and imaging the possibilities of what this rock could be.  As we were coming to our conclusions, my daughter asked if we could keep this one. I carefully explained to her that this rock was much too heavy to haul home, and to keep. I reminded her that we can always search for rocks like these, to explore and investigate, and maybe even take photos. 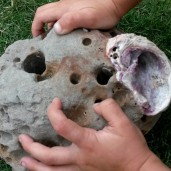 And then the pleading began. I secretly wished that we had found this treasure a little closer to home, that we could just roll it up to front step, and evaluate it to our hearts contents, for days and weeks to come. I just couldn’t see how we’d get it home. It was awkward and heavy, and I struggled to carry it more than a few feet. I continued to search for the words to convince her that it would be okay to leave it where it lay. And then I realized that her little toes had stepped away from me and were pitter pattering across the wet sand, in a bee line to her Daddy’s side. I watched, and I knew the conversation that was taking place. I too, had been a Daddy’s girl, on a day not so long ago. My husband soon came close, to look at the rock again, glanced up at me, and I knew he agreed.  The words of denial had not yet left his mouth, before the wailing began. We looked on in awe, because, you see, our daughter is not the typical three year old. Tantrums are a rare occurrence with our uncharacteristically articulate toddler. She is wise beyond her years, and has a deep understanding that there are better ways to get what you desire most in life. But, she was beside herself in this moment, and she flew into one the most epic displays of young rage. There was no reasoning, no comprehension, and no way to get through to her.

My husband and I exchanged side-long glances and waited for the explosion to pass. Once the rage had left her face, we huddled together in deep discussion, explaining the ways of expressing a passion so strong.  Having understood, our precious little discoverer, pleaded with us through the glistening tear drops that had collected on her lashes. She was nothing short of desperate, to retain this beloved rock, to cherish it, for what she believed would a lifetime of sentiment. And so we stood, tucking the rock into the arms of her Daddy, exasperated and enamored by the evolution of this profound and passionate spirit. My husband laughed, at the things we do for little loves, as he lugged around, what was literally the equivalent of a sea sculpted bowling ball.

We brought it home and tried a few Google searches; in seek of a label for this type of rock. We had a few ideas, such as a fossil or a meteor, but it definitely wasn’t either of those. A little more digging and we came across a match, a piddock rock. But, what the heck was a piddock rock anyway? As it turns out, this holey rock is essentially the equivalent of a condominium complex for a special type of boring clam. Not boring, as in, a lackluster personality, but boring, as in drilling holes. This clam is commonly known as a piddock clam. It is a unique salt water mussel that has a “foot” that remains exposed from its shells. The foot secures itself to the surface of a porous rock, and then rotates itself while using the teeth on one end of the shell.  It uses the teeth to drill into the mass of a soft or porous rock, and sometimes into wood. As the mussel grows, it continues to bore the surface surrounding it, to grow within the rock.  Once it has secured itself into the rock, it has sealed its own fate and has also guaranteed its own longevity. The mussel never leaves its boring rock, and is in turn protected by the rock from the thrashing seas. The piddock survives with a simple digestive valve system. The valves reach beyond the shell of the clam and are used in an effective intake/outtake system. One valve allows the mussel to take in the nutrients (mostly plankton) necessary to sustain growth and life. The other valve is used to expel the waste away from the specimen. These incredible mussels have an average life span of 10-12 years. Their beautiful shells, when opened, have a notable resemblance to angel wings, and in some cultures, the mussel is known as such. However, it is rare to find intact piddock shells, as they are so fragile that they often crumble or even disintegrate when they are released from the rock after the death of the inhabiting creature. Some piddock rocks, like the one we found, still hold the shells within the boring holes, as the shells have grown too large to fall from the opening. In many cases, other mussels and soft bodied sea creatures will inhabit the caverns left behind by the piddock. The piddock clam and its boring rocks are common, and you might find one of any varying size, on any seashore around the world.

As you might imagine, our family has become quite intrigued and fascinated by this special shore find. We still have it on the front porch, as it makes quite an interesting decoration. From time to time, the kids ask to have it pulled to the ground, where they roll it from side to side in the grass, inspecting every cranny again for the thousandth time. They love to do experiments with the rocks, to see which shells still rattle, which holes hold water, and even which stick fits through the tunnels. Sometime we wonder if a new creature, of the land variety, will claim a home in one of the holes. Not yet! But, there is still plenty of time for that.

One Reply to “Details of a Holey Beach Treasure”