Look Up in Ecuador

*A Featured submission for the  Photo Challenge: Look Up.*

When you live in Ecuador, looking up is a natural way of life. In a land as diverse as this, you don’t want to miss a thing. There is plenty to see, in every direction. A volcano or a mountain on the horizon, a whale or a dolphin in the sea, monkeys and snakes in the jungle, a blow fish or a sea star on the beach. If you don’t take the time to look around, you’ll surely miss something you’ve never seen before.

Our family relocated to the beautiful Ecuador, just shy of 5 months ago. In that time we have lived in 3 different homes, in three different cities. The last move was about 10 weeks ago, to a quaint fishing village located on the central coast. San Clemente is a humble, little seaside town tucked between the balmy waters of the Pacific Coast and a nameless chain of small, local mountains. Scenic cliffs tower over cocoa colored beaches sprinkled with pink shells and blue crabs. Dusty dirt lanes give way to primitive hand paved, brick streets and an eclectic assortment of bamboo, cinder block, or clay brick homes. Our family lives at the end of one these such lanes, in a cute two level concrete condo with red, Spanish style roof tiles. It is peaceful and quiet, away from a world full of hustle and bustle. It can be easy to forget the existence of a 21st century world here, and with it, the modern jungles of first world societies.

We spend countless minutes, hours, and days soaking up the perpetual summer sun under the effervescent ocean mist.We are not the only ones to cherish this wonder of this secret paradise. The subtropical birds love it too, and so do the uncountable varieties of geckos, salamanders, lizards and iguanas. Many mornings, afternoons, and evenings, we sit gawking up to the sky, hoping to identify and variety of songs, screeches, clucks, and scratches. 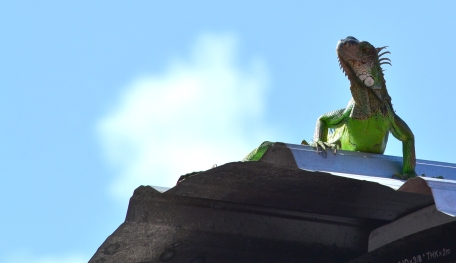 It didn’t take us long to discover a handsome, emerald colored iguana, who likes to perch on our rooftop, basking in the mid day sun. The majestic reptile, rarely makes a sound, except to clamber across the tiles to find his favorite hiding place. Most days, he tucks himself so far beneath the tin lined tiles, that only the tip of his striped tail, dangles below the eaves. On occasion, he is accompanied by a friend of his, and together they lie tangled in the shadows to borrow the heat from the steaming heights.

It is a rare day, when he puts himself on display, such as he did, on the morning when I captured these photos. I couldn’t help but feel the tables were turned, and that perhaps he was studying me as intently as I was him. We were captivated by the movements of the other, and the few moments of opportunity seemed to span into oblivion. After just a few good shots, I set the camera down, enticed to study him with my own bare eyes. In that moment, it didn’t matter if I got the perfect picture, what mattered, was to memorize each centimeter of what I was seeing. To engrain the experience within, to take a moment for more than a photo,  but  instead for a lifetime of recollection in the memories that last forever.

It wasn’t but a few moments later, before he turned his mohawk head, dismissing me from my observances. I watched as he gracefully slipped away from my view, and slinked back into the wild jungle of a mountain, that rests just behind the house. And then I set to work, to explore, research, and understand this prehistoric looking creature. 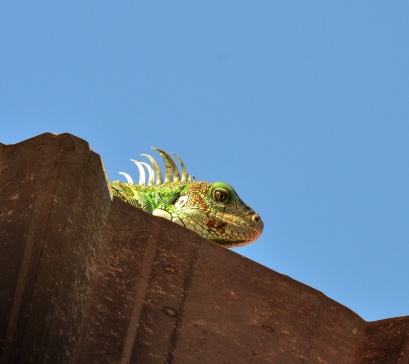 This particular iguana is known simply as the green iguana, iguana, or the American iguana. It is native to Mexico, Central and South America. Contrary to popular belief, it is not native to anywhere in North America, including Hawaii and Puerto Rico. Green Iguanas that are found in the US, are usually found in California, Florida or Hawaii, and they are abundant in the US Virgin Island of Puerto Rico. These inhabitants are an invasive species to the areas, and have emerged as a result of the influx of iguanas purchased as pets that began in the mid 1990’s. Since then, it is estimated that millions of iguanas have been bought and sold in the US. They are a popular choice for reptile lovers because they are cheap, easy to feed, and are generally non-aggressive.  Unfortunately, nearly 70% of these pet iguanas either die or are released into the wild within their first year of captivity. These discarded pets have been able to survive, reproduce, and even thrive in the listed locations due to desirable climate and lack of predators. In recent years, it has become illegal to be in possession of one in Hawaii. The species is so harmful to the unique environment of the islands, that violators can be fined $250,000 and can face possible prison time. In Puerto Rico, the green iguana has become so prevalent, that the public is openly considering hunting and serving the reptile, as a new culinary delight, in an attempt to offset the rampant population.

Here in Ecuador, and in all of its native lands, the green iguana is considered a threatened species. The green iguana is primarily a herbivore, and spends the vast majority of its life in tree tops, and more specifically, in the rain forest. With the continued destruction of its habitat, the species has been forced to expand its environment to include areas outside of the jungle, to areas that can accommodate the need for warm climate and a natural water source.

The iguana is mostly a herbivore, but is also known to eat the occasional insect, especially in its youth. The animal typically stays in one tree for an extended period of time, foraging on the leaves, flowers, and fruits of its location. Generally, it only descends to change trees, to mate, or to lay its eggs. The iguana mates early in the dry season, lays its eggs on the ground approximately 2 months later, and the hatchings emerge near the beginning of the wet season. Each female iguana can lay 10-20 eggs, but only about 30% of these hatch. Baby iguanas are just one inch in length, but can eventually grow up to 6 feet in length and 20 pounds in weight,over a span of approximately 20 years. Male, female, and juvenile iguanas can be distinguished by their color and size. Juveniles are bright green in color and small in size until about 9 months of age, when they can reach 18 inches in length. Adult females range in color from green to gray and are smaller than adult males. Adult males are duller and can show variations in color from yellow to orange to brown, especially during the mating season. Adult males can have dorsal spikes up to three inches in length. 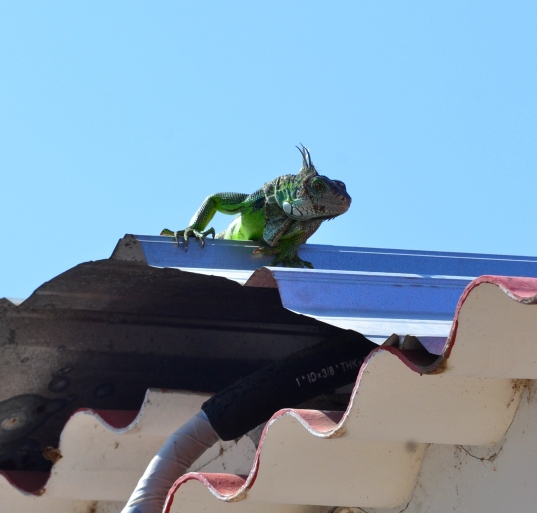 This particular reptile is not aggressive, and is even regarded as docile in nature. It is generally not a threat to humans, although it could be dangerous if threatened or approached during mating and nesting season. Wild iguanas are avid climbers, and swimmers, and will likely retreat in a confrontation with humans. When threatened, they have the ability to drop their tail, leaving it behind to distract the predator, while scurrying off in the opposite direction. The tail is regenerative and will regrow in time. If unable to retreat, an iguana may use their tail in a whipping motion or may bite or scratch in defense. Their razor-sharp teeth and three-inch claws could cause significant damage to any unsuspecting victim. The tail of a full-grown iguana can be swung with enough force to break a human arm. A wild reptile such as this, should generally be avoided, and not mistaken for a tame house pet.

In its natural environment, the green iguana, is a delight to discover perched atop a roof or resting in a tree. It’s certainly a treasure to see, visiting or living in any of the Latin American countries, where is it happy to call home. And, there’s no question about it, if you don’t take a moment to look up, you will likely the miss opportunity to witness one of today’s last living dinosaurs. 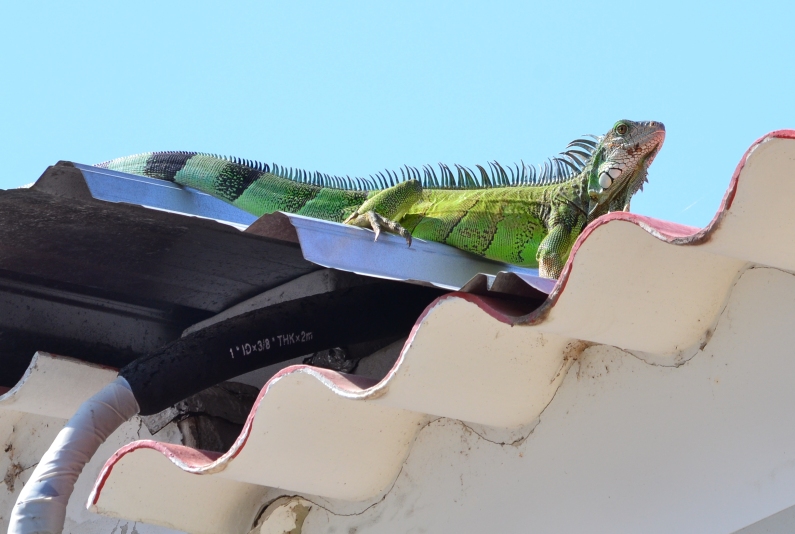 14 Replies to “Look Up in Ecuador”